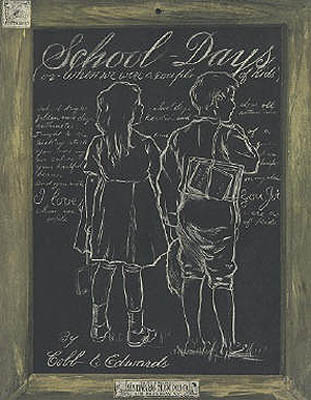 By 1910 vaudeville was full of schoolroom acts. It was natural for a fledgling comedy team like the Marx Brothers to follow a popular trend and led by Groucho they made their own adaption. This was their first show in which comedy and not music was the key ingredient and very soon the Marx Brothers became popular vaudeville comedians. Like virtually everything else in vaudeville, Fun In Hi Skule was just as much "Fun with Ethnic Stereotypes". Groucho portrayed a "Dutch" or German (Deutsch)-accented comic, the stick-carrying Herr Teacher, in frock coat and a scratch wig simulating baldness. He sat at a desk towards the rear of the stage. Either side were doors marked "Boiz" and "Goils". The "Boiz" included Gummo as "Izzy", the Hebrew Boy, and Harpo as "Patsy Brannigan", an Irish-cum-rural type that was a regular character in vaudeville shows. The type was based on a real-life Irish comic of that name active in the 1890s.