This list was compiled by Jay Hopkins and transferred to electronic form by Frank Bland. I only made some updates. Read what Jay and Frank wrote about these listings. 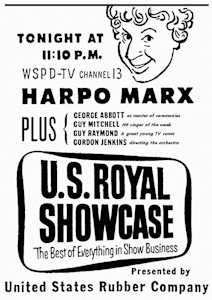 28 Mar 1954 - General Foods 25th Anniversary Show
A Salute to Rodgers and Hammerstein
Carried on all three networks, 8:00 pm, 90 min
Groucho Marx
Groucho engaged in a round of "You Bet Your Life" with the guests of honor
Available recording: WB

18 Nov 1954 - Shower Of Stars
Entertainment On Wheels
CBS, 8:30 pm, 60 min
William Lundigan (host), Betty Grable, Harry James, Eddie Mayehoff, Danny Thomas, James Dunn, Michael O'Shea, William Bishop, Gil Stratton Jr., Rochelle Hudson, Ed Wynn, Groucho Marx
color. Groucho: "I had one line which was 'Let's get something that we can all enjoy.' The idea was that Betty Grable and Harry James were sitting in the front seat of a DeSoto and I was hiding in the back, on the floor. Thus when Betty Grable pressed the radio dial again, tuning to my show...the producer asked me to eliminate the line...the big surprise was supposed to be me bouncing into the scene...it occurred to me that in Cocoanuts and Animal Crackers I had about 90 sides of dialog. Here I had only one line and they even clipped that. Well, I guess that's show business." -- The Groucho Letters, 1967. The scene he describes appears in "Shower of Stars" of Jan 18, 1955

18 Jan 1955 - Shower Of Stars
CBS, 60 min
Betty Grable, Harry James, and Ed Wynn, and about a half-dozen guests who made cameos, including Groucho.
The show bordered on being an infomercial for Chrysler products. Groucho's appearance was VERY brief! In one scene, Grable and James are taking a new car out for a test drive, and they turn on the radio just in time to hear the opening of a YBYL broadcast. Just as George Fenneman says "The One.. The Only.. Groucho!" Groucho pops up from the back seat and says something like "Hey! That's Me!"
Available recording: WB

9 May 1955 - I Love Lucy
CBS, 9:00 pm, 30 min
Lucille Ball, Desi Arnaz, Vivian Vance, William Frawley, Harpo Marx.
Lucy tells her New York friend that she's been "hobnobbing" with Hollywood stars. When her friend shows up in California, Lucy is forced to carry on the charade by masquerading herself as various stars, including Harpo. Problems arise when the real Harpo Marx shows up. The show ends with Harpo and Lucy re-enacting "the mirror scene."

14 Dec 1955 - This is your life
A testimonial to H. Lloyd
NBC
Groucho, who incidentally happens to sit at the restaurant table next to Harold, keeps interfering (and trying to advertise DeSotos) when host Ralph Edwards drags Harold into the show.

9 Oct 1956 - See You At The Polls
NBC
Groucho Marx.
Film of Groucho in this pre-election special

19 Apr 1958 - Dupont Show Of The Month
The Red Mill
CBS, 8:00 pm, 90 min
Shirley Jones, Donald O'Connor, Evelyn Rudie, Harpo Marx
Musical comedy about a small Dutch town's legend of "The Red Mill," and its effect on the local inn-keepers and the American actors passing through the town. Color.

1959 - The Deputy Seraph
Chico, Harpo and Groucho Marx
This once again teamed Harpo and Chico; this time as two angels whose
Available recording: 2002-02-12

14 Jan 1959 - Kraft Music Hall
NBC, 9:00 pm, 30 min
Milton Berle, host; Mahalia Jackson, Harpo Marx, Virginia Gray
color. "Harpo is questioned about his late arrival by Uncle Miltie and describes a vertical in-and-out shape. Uncle Miltie asks if Harpo could get him one and didn't exactly have in mind the Coke bottle Harpo brought back. Along with this echo of past mime scenes, Harpo gives his leg to his host, plays around hungrily during a "Kraft" recipe commercial, and makes faces through his harp that had a studio audience roaring while Berle was on camera." -- The Marx Bros.: Their World of Comedy, 1966.

8 Mar 1959 - G.E. Theater
The Incredible Jewel Robbery
CBS, 9:00 pm, 30 min
Harpo Marx, Chico Marx, Groucho Marx, Benny Rubin, Joy Rogers, Ronald Reagan (host)
The last appearance together of the three brothers on TV. Harpo and Chico plot to pull of a jewel heist. Groucho makes a cameo appearance at the end. CBS explained it: "If you watch the show you'll see a familiar face equipped with mustache and leer. Because of his contract terms, his name can't be mentioned, but he is not Jerry Colonna."


Apr 1959 -
British TV
"Chico appeared on a British variety show some time after THE INCREDIBLE JEWEL ROBBERY. I believe this was when he landed in England in 1959, only to experience severe stomach pains, forcing him to cancel a proposed tour just two days after he arrived. Chico looks terrible in the bit (using Harpo's Coke bottle gag for the announcer) but plays "Listen to the Mockingbird" (as in GO WEST) with the old flair. Can't set the date on this, but the opening frames of the show feature photos of Chico in the policeman's outfit that he wore in INCREDIBLE JEWEL ROBBERY. The above footage is excerpted in the Disney Channel bio on the Marxes aired several years ago." (Edward D. Watz)

20 Mar 1960 - G.E. Theater
Do Not Disturb
CBS, 9:00 pm, 30 min
Arthur: David Wayne, Irene Martin: Peggy Knudsen, Steve: Gil Rogers
Written by Arthur Marx and Mannie Mannheim. Adapted from Marx's novel, Not As A Crocodile. "Arthur Martin makes his living at home, writing articles for a monthly magazine. But working at home has its disadvantages: the family hardly ever leaves him at peace."

3 May 1961 - I've Got A Secret
CBS, 9:30 pm, 30 min
Garry Moore, moderator; Panelists: Betsy Palmer, Bess Myerson, Henry Morgan, Johnny Carson; Harpo Marx, guest
Harpo showed up to plug his book (as he did the next week on YBYL) and played a little Q&A charades with the panel

14 May 1961 - Candid Camera
CBS, 10:00 pm, 30 min
Arthur Godfrey, Allan Funt, hosts. Harpo Marx, guest
Harpo Marx is stationed inside a Coke machine. As customers insert their change, Harpo comes across with the proper beverage, then offers some ice cubes too.

25 Oct 1961 - DuPont Show Of The Week
Merrily We Roll Along
NBC, 10:00 pm, 60 min
Groucho Marx (narrator)
Groucho Marx is the on-and-off screen narrator for this view of Americans getting off their horses and into critterless carriages.
Available recording: WB

9 Jan 1967 - I Dream of Jeannie
The Greatest Invention in the World
NBC, 8:30 pm, 30 min
Larry Hagman, Barbara Eden, Hayden Rorke, Bill Daley, Barton MacLaine
Groucho Marx makes a cameo appearance at the close of the show as a favor to producer Sidney Sheldon.
Roger and Jeannie convince Tony to let Jeannie grant Roger a wish. The wish was that he would like to be the funniest person in the world. At that point he turns into ... Groucho, who hands Larry Hagman his cigar. "You hold this," he says to Larry, "and I'll hold this," at which point he reaches for Barbara Eden.
Available recording: WB

16 Jun 1967 - The Dating Game
Groucho and Melinda Marx
A special show in honor of Father's Day. The first round had a sweet young thing asking questions of three fathers, who had to respond on behalf of their sons. The three fathers were bandleaders Les Brown and Charlie Barnet, and "Candid Camera" co-host Durwood Kirby. The second half featured the father of an eligible bachelorette who had to ask questions to three bachelors on her behalf. The young woman's name was Melinda Marx.
Available recording: WB

7 Jul 1967 - Firing Line
Is the World Funny?
PBS, 50 min.
Groucho is interviewed by the show's host William F. Buckley. A transcript can be downloaded here
(recorded on 07/07, transmission date unknown) DVD is available from amazon

1974 - The Tonight Show (?)
NBC, 11:30 pm, 90 min
Bill Cosby, guest-host; guests included Groucho Marx, Foster Brooks.
This listing was provided by Neil Sharrow, who notes: "...I can't put an exact date on it...Groucho and Cosby make a couple of comments about Watergate, and it is clearly before Nixon's resignation, so it must be 1973 or 1974. Groucho also discusses his French medal of honor, and a book that he is working on that is 'the definitive story of the Marx Brothers.'"

2 Apr 1974 - Academy Awards Show
NBC, 10:00 pm
Groucho Marx is presented an Oscar for his "brilliant creativity and for the unequalled achievements of the Marx Brothers in the art of motion picture comedy." Presentation is preceded by a sketch from "Minnie's Boys," and Marx Bros. film clips. Presented by Jack Lemmon on behalf of The Academy

2 May 1974 - Wide World Presents Dick Cavett
Tribute to Groucho Marx
11:30 pm, 90 min
Dick presents many highlights from Groucho's many appearances on his program.

1982 - Groucho in Toto
Channel Four, UK
Written by Alec Baron. Recorded live at the Shaw Theatre. Jon Rumney as Groucho Marx portrays some of the events of his life.
Check the BFI database for more information

1987 - The Ten-Year Lunch
The Wit and Legend of the Algonquin Round Table
56 mins.
Heywood Hale Broun - Narrator
Members of the Round Table including Harpo are shown in archive footage.

1990 - An Evening with Groucho
Ha! Channel
It is very difficult to watch because of the quality but obviously worth seeing. The concert footage was interspersed with interviews