There now is an extra page to list references to the Marx Brothers in movies, TV shows, books, etc. Click here to go to the page.

Here is some trivia from Michael A. Yahn:
"I thought it might be interesting to list a few unusual facts on the Brothers. Some you may have heard before..others you may not have. Here's a few to start things off. Maybe you gotta some good ones to add eh?"

The Algonquin in New York was a prime social meeting place for the Round Table which included Harpo and Kaufman and occasionally Groucho. It is revived in the film 'Mrs. Parker and the Vicious Circle'. The character listed as Harpo Marx is played by J.M.Henry. George S. Kaufman was played by David Thornton.

In Studio City, CA, there are streets by the name of "Freedonia" and "Teasedale" within a few blocks of each other.

This review of the Four Marx Brothers appeared in "Variety" in the "New Acts" section on 2-7-19. It's interesting because, unlike what you read about the Marxes today, it looks at them as working comedians, not Legends Of The Past (so the writer carps about old material, and most interestingly, several actors who influenced Groucho). It was also written at a time when the brothers were still known by their given names -- Julius, Arthur, Herbert, and Leonard -- instead of their nicknames. The act reviewed here is also the first time Zeppo appeared regularly with the brothers, and was written while they were still living in Chicago. They had bought a chicken farm there during World War I so that they could claim they were farmers, allowing them to dodge the draft (as farmers were thought essential to the war effort). Instead of doing much farming, they played vaude all year and went to White Sox games in the summer.
Ben Schwartz <benjy@sirius.com>

The act is billed as "The Four Marx Brothers in Their New Revue." It is really not a new revue -- it's the old revue with new scenery, new gowns, new gags, new songs and a new Marx brother, Herbert Marx, who replaced Milton Marx, when Milton went into the army and liked the job so well that he stayed put. The best thing that can be said about the new act is that it's as good as the old one. It is still titled "Back Home," and the week at the Palace is in verity a trip "back home" for the boys, who live in and are made much of in Chicago. There isn't an act in vaudeville that is more surefire than the Four Marx Brothers. They have been in vaudeville so long that nearly everybody who goes to vaudeville with any degree of regularity has seen them. Their new act is not really a new act, nor is it the old act. It's a compromise. The boys could use an altogether new act, and have announced that they will.
Julius Marx is developing into an actor. He knows flashes of Louis Mann; at least a "chemical trace" of David Wakefield and at times reflects the canny technique of Barney Bernard. Julius has a strongly defined sense of humor. His asides are more funny than the set lines. He is a confirmed ad-libber and claims he has a right to interpolate, he having written the material for the act. Arthur Marx, known as "Harpo," because of his adaptness with the harp, is the sole survivor on the American vaudeville stage of the school of pantomine. Without saying a word he draws most of the laughs of the act, and that not by virtue of mere mugging, but by the utility of props, gestures, and psychological situations.
Leonard (Chico) in the character of the wop, backed by his nifty piano playing and ingenious "fingering," and Herbert (Zep) as the straight man, do their work with eminent satisfaction. Little Gene Maddox is still in the act. Her youthful charm and swift eccentric stepping with the youngest Marx win her a big hand. Clarence Sterling has replaced Ed Metcalfe in the character of the cop in the scene in "one," and was born for the part. The two singing girls in the act have remarkably good voices, and lend their really artistic rendition of numbers to the roughhouse comedy of the act to very good effect.
Swing.
Variety, New Acts, Feb 7, 1919

Thanks to Simone Starace for providing information.

Over the past fifty years, Mad Magazine has used references to and images of the Marxes many times. Frank has gone over every issue from the beginning through December 1998 and found about 35 of these and has included them in a feature he likes to call Mad Marxness.

Read Kathy Biehl's interview with Simon Louvish to find out about this novelist and biographer and his latest book, Monkey Business: The Lives and Legends of The Marx Brothers, widely regarded as one of the greatest books ever written about the Marxes.

Michael W. Davidson at the National High Magnetic Field Laboratory at The Florida State University has taken a whimsical approach to optical microscopy with his Molecular Expressions Website. His collection of photographs taken through an optical microscope (commonly referred to as "photo-micro-graphs") have won the acclaim of many and were featured in a blurb in the September 1999 issue of National Geographic. The microscopic photographs featured at Michael's site range from vitamins, beer, ice cream, and cocktails to images taken from integrated circuits and ceramic superconductors. And it is in this latter medium that Groucho has recently been sited. (The photos and descriptions below were taken from the Molecular Expressions Website and are used here by permission of the copyright holder.) 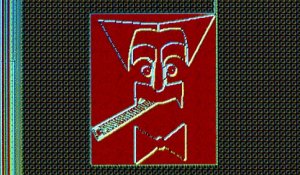 "Julius 'Groucho' Marx was the most famous of the Marx Brothers comedy team and eventually wound up with his own television show. Groucho has now moved into the cyber age with his presence on a pad woven within the integrated circuitry of the Silicon Graphics MIPS R12000. This microprocessor chip bears the greatest number of silicon creatures (six) that we have ever found on a single chip. The wireframe rendition of Groucho is about 100 microns high." 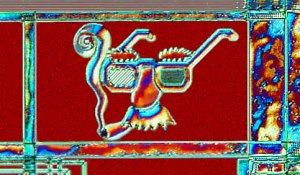 "We found this unusual character smoking a cigar on the Weitek P-9000 graphics accelerator chip used to power many video cards in the early 1990s. This particular chip was cut from a dysfunctional Diamond Viper VLB video card with 8 MB of RAM. The card was labeled "Fastest video on planet Earth" by Dell in a 1993 marketing campaign aimed at selling high-end 486 local bus computers. We don't understand the significance of this guy with a bushy mustache and eyebrows, but it appears that he is wearing polarizing sunglasses (that may be 3D glasses to enhance video) and the whole thing strongly resembles a Groucho mask."

A Tribute To Harpo

Frank originally posted A Tribute to Harpo on the 109th anniversary of the birth of Harpo Marx (November 23, 1888). In recognition of this event, he has made available some very touching writings about Harpo, by Jack Kerouac, Allan Sherman, and the mailing list's own Sword Fish (Aimee to her friends).

On May 29, 1997, George Fenneman died. Fans of the Marx Brothers will all remember Fenneman as the announcer on Groucho's program, You Bet Your Life. Groucho considered Fenneman to be his greatest foil since Margaret Dumont and the two remained close friends until Groucho's death in 1977. Frank has posted copies of two of Fenneman's obituaries to this site -- one from The New York Times and one from Associated Press (thanks to Jonathan Jacobs and Christine L. Taylor, respectively, for forwarding these articles). To read these obituaries, point your browser to George Fenneman -- 1919-1997.

...is over, and the results are in! If you entered and want to see how you did, or even if you didn't enter but you'd still like to see the answers and the winners, click on "Why A Duck? Contest Results.

In June of 2000, we held a contest to decide the best Marx-related haiku that could be produced by members of The Duck List. Here are the results.

...is also over. But I attended and took a bunch of pictures, some of which are available for your enjoyment. The Marxes were honored with a lifetime achievement award, we were treated to a strange comedy show, and I (for one) had a great time. Check out the pix and what I have to say about the whole experience by paying a visit to The 13th Annual Ocean City DooDah Parade.

If you want to know what the experts and just plain folks had to say about whyaduck.com, check out Kudos -- A Little Dab'll Do Ya.