On the website judaisme.sdv.fr I have found some detailed information prepared by Pierre Kogan about the family of the Marx Brothers' father Simon:

On the marriage certificate of the Marx Brothers' parents (which is full of spelling mistakes made by the official) the groom is named Samuel Marks, but he signs his name Simon(3) Marx. He is listed as being 24 years old and a tailor, born in Alsace, France. His father's name is given as Mark Marks and his mother's first name as Honne (Hanna). His wife is registered as Mine Schonberg, 20 years old, and she signs Minnie Schonberg. They lived at 330 East 85th Street. Minnie's parents are Levi and Fanny Schönberg. The witnesses are given as Adolphe Lefran and Kornelius Zimmermann.

In archives of the region of Bas-Rhin Kogan found information about Simon(3) and his parents: The Marx Brothers father, Simon Marx(3), was born 23 October 1859 in Mertzwiller.

The great-grandparents of the Marx Brothers were Simon Marx (1), born 29 September 1803 in Batzendorf, and Babete Weil, born 1804, who were living in Hochfelden.

Simon(2) and Adele had several children and on one of the children's birth certificate gave their profession as "door-to-door vendors". Their children were born in several villages in Alsace probably due to their travels as door-to-door vendors. The mother of these children is sometimes given as "Anna (or Johanna) Isaac" and sometimes as "Adele Levi". Also in some documents Simon(2) and Adele are listed as being married, whereas in others a child is listed with Adele being an unmarried mother, but the child being recognised by Simon(2). There was a Johanna Issac born on 12 March 1839 in Lorsch, near Darmstadt, Germany. Isaac, the son of Simon(2), reports her death on 10 July 1910 and give her profession as door-to-door vendor. Kogan concludes that Adele (the name on Simon's(3) birth certificate) and Hanna — in some documents spelled "Johanna" or "Honne" (the name on Simon's(3) marriage certificate) — are the same person. Adele/Johanne may have gotten married to Simon(2) in Germany. This explains why Kogan was not able to find and birth or marriage certificates in the French archives. That Simon(3) gave his father's name as "Mark" may be explained by the inscription on Simon(2)'s tombstone. A Latin inscription has the name "Simon" and the Hebrew inscription is "Mordechai", which could have become "Mark".

There is nothing to indicate that the family was ever known under the name "Marrix", which is mentioned in some books.

The Schönberg family comes from Dornum in northern Germany. Miene's grandfather was Abraham Moses Schönberg who had an affair with Schöntje Weiler (1789-1888). Weiler was married to the much older Gossel Lazarus Funk (1749-1826). Even before Funk's death she had two children with Schönberg, Levy in 1823 and Jetta in 1825. A third child, Prinzgen Abraham, was born in 1828. Abraham and Schöntje got married in 1827.
Levy was first named "Funk gen. (called) Schönberg", but the "Funk" was later droppped. 1851 Levy married Sophie "Fanny" Salomons. The Schönberg family lived in poor conditions. Levy was an umbrella maker and ventriloquist, Fanny played the harp and they may also have appeared at markets or fun fairs.
Levy and Fanny had eight children. Their daughter Miene was born on 9 November 1864 in Dornum in northern Germany. The Schönberg family came to New York in 1880. Miene's brother Abraham became famous under the name Al Shean as part of the "Gallagher & Shean" duo. Levy and Fanny lived with Miene, Simon and the Marx Brothers. Fanny had brought her harp from Germany and started Harpo's interest in the instrument. Levy died in 1919 and Fanny in 1908. Levy lived to the age of 96, but not to 101 as Harpo said in "Harpo speaks".
Groucho visited Dornum in 1956 with Eden Hartford and his daughter Melinda. Also with them was Robert Dwan the director of "You Bet Your Life".

The Marx family in America 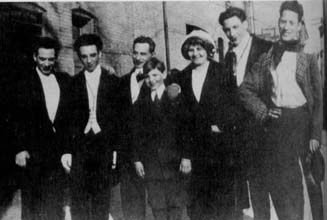 Minnie met Simon at a dance. They got married in 1885. Simon was was a dancing teacher but later became a tailor, although not a very good one. His hidden talent was cooking, and he often bribed a landlord to wait for the rent with a meal. Minnie died in New York on 14 September 1929. When the Brothers moved to Hollywood, Sam followed them. Sam can been seen in the film "Monkey Business". He sitting on top of a stack of luggage on the pier and waving to the ship. Sam died in Los Angeles on 10 May 1933.