The Marx Brothers
The Cocoanuts - Why A Duck?

Home | Movies | The Cocoanuts | Scene: Why A Duck? 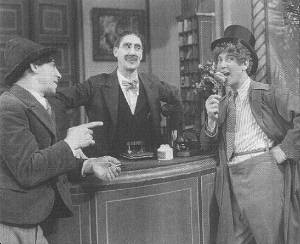 Note: links in the following text point to recordings of these lines in Windows WAV format.

Mr. Hammer (Groucho) is complaining to Chico about the the way his partner (Harpo) is behaving. He then shifts gears and comes up with an interesting proposal for Chico...

Hammer: (to Chico) Come over here, I want to see you... Now listen to me, I'm not gonna have that red-headed fellow running around in the lobby. If you wanna keep him up in your room, you'll have to keep him in a trap.

Hammer: Who is he?

Chico: Atsa my partner, but he no speak.

Chico: I no buya nothing.

Chico: I no gotta no money.

Hammer: You gotta no money?

Chico: I no gotta one cent.

Hammer: How you gonna pay for your room?

Chico: Well, you see, we come here to make money. I read the paper and it say, "Big Boom in Florida," so we come; we're a coupla big booms too.

Hammer: Well I'll show you how you can make some real money. I'm gonna hold an auction in a little while in Cocoanut Manor. Uh...you know what an auction is, eh?

Chico: Sure! I come from Italy on the Atlantic Auction.

Hammer: Well, ah...let's go ahead as if nothing happened. I say I'm holding an auction at Cocoanut Manor, and when the crowd comes around I want you to mingle with them...don't pick their pockets, just mingle with them and...

Hammer: That's right. Now, if nobody says anything then you start it off.

Chico: Yeah, how'm I gonna know when they no say nothing?

Chico: Well, maybe I no listen.

Hammer: Well, don't tell 'em...Now then, if we're successful in disposing of these lots I'll see that you get a nice commission.

Chico: And, eh, how 'bouta some money?

Hammer: Well, you can have your choice. Now, in arranging these lots, of course, we use blueprints. You know what a blueprint is, eh?

Hammer: How is it you never got double pneumonia?

Chico: I go 'round by myself.

Hammer: (thinks) You know what a lot is?

Chico: Yeah, itsa too much.

Hammer: I don't mean a whole lot, just a little lot with nothing on it.

Hammer: The next time I see you, remind me not to talk to you, will ya?

Hammer: (interrupts) Come over here, Rand McNally, and I'll explain this thing to you. Now look, this is a map and diagram of the whole Cocoanut section. This whole area is within a radius of approximately, eh, three-quarters of a mile. (pause) Radius...is there a remote possibility that you know what radius means?

Hammer: Well, I walked right into that one...it's gonna be a cinch explaining the rest of this thing to you, I can see that.

Chico: I catch on quick.

Chico: Where you got Cocoanut Custard?

Hammer: Why, that's on one of the forks...you probably eat with your knife, so you won't have to worry about that. Now, eh, here is the main road leading out of Cocoanut Manor...that's the road I wish you were on. Now, over here on this site we're gonna build an eye and ear hospital. This is gonna be a site for sore eyes. You understand?

Hammer: Now, right over here...this is the residential section.

Hammer: (pause) Well, we'll Passover that...You're a peach, boy. Now, here is a little peninsula, and, eh, here is a viaduct leading over to the mainland.

Chico: Why a duck?

Hammer: I'm alright, how are you? I say, here is a little peninsula, and here is a viaduct leading over to the mainland.

Chico: Alright, why a duck?

Hammer: (pause) I'm not playing "Ask Me Another," I say that's a viaduct.

Hammer: Well, I don't know why a no chicken; I'm a stranger here myself. All I know is that it's a viaduct. You try to cross over there a chicken and you'll find out why a duck.

Chico: When I go someplace I just...

Hammer: Look...look, suppose you were out horseback riding and you came to that stream and you wanted to ford over...You couldn't make it, it's too deep!

Chico: Well, why do you want with a Ford if you gotta horse?

Hammer: Well, I'm sorry the matter ever came up. All I know is that it's a viaduct.

Chico: Yes, everything excepta why a duck.

Hammer: Well, that's fine...then we can go ahead with this thing. Now look...I'm gonna take you down and show you our cemetery. I've got a waiting list of fifty people down at that cemetery just dying to get in it, but I like you.

Chico: Yeah, you're my friend.

Hammer: I like you, and I'm gonna shove you in ahead of all of 'em.

Hammer: I'm gonna see that you get a steady position.

Hammer: And if I can arrange it, it'll be horizontal...Now, remember, when the auction starts, if somebody says a hundred dollars?

Hammer: That's great! Now, you know how to get down there?

Hammer: (interrupting) Now look...now look, you go down there, down that narrow path there...until you come to the...that little jungle there, you see it? Where those thatched palms are...and there's a little clearing there...a little clearing with a wire fence around it. You see that wire fence there?

Hammer: Oh no! We're not gonna go all through that again!

(This page was originally created for Frank Bland's 'Why A Duck?' website)