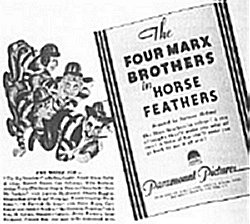 Quincy Adams Wagstaff (Groucho) takes over as President of Huxley College. His son Frank (Zeppo) convinces him to buy a couple of football players at a local speakeasy so Huxley can have a winning team. For some bizarre reason, Wagstaff mistakes Baravelli (Chico) and Pinky (Harpo) for the genuine article, after getting involved with Baravelli in the famous "Swordfish" scene.
Meanwhile, Wagstaff and his son are competing for the affections of the college widow (Thelma Todd), who is trying to get a hold of Huxley's football signals. Wagstaff first encounters the college widow during a very funny scene in his Office.

This picture contains the most hilarious lesson ever given by a college professor as Wagstaff's lecture turns into a brawl. It also contains a few cute musical numbers, for example "I'm Againt It", and as usual, terrible choreography performed by people who just can't dance. All ends in a completely insane football game.

BARAVELLI: Hey, what'sa matter? You no understand English? You can't come in here unless you say "swordfish". Now, I give you one more guess.

Some footage is missing from the "Horse Feathers"-version available today. Removed was a scene of Harpo catching different sizes of dogs with different sizes of fire hydrants and also some various small moments from the scene in Connie's apartment, like Harpo doing a headstand in Connie's lap. The cuts may have been done as an act of censorship and/or for showing on TV. 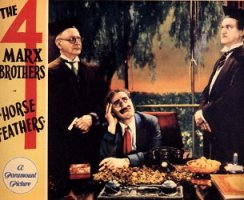 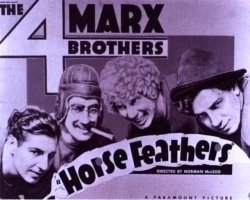