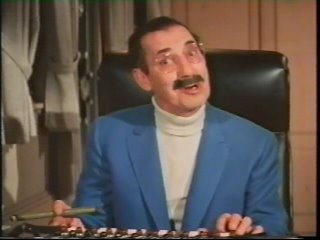 This 1968 comedy film which was Groucho's last appearance in a movie, featured a cast of mostly stars and veteran character actors. It was an "acid comedy", with elements of free love and the hippie movement, and satires of technology, anti-technology, modern times and creature comforts.

The story is about a retired mobster, Tony Banks (Gleason), now settled with wife Flo (Channing) and daughter Darlene (Hay), who worries about his daughter's new hippie boyfriend Stash (Law), and his own paternity of Darlene. Romero and Avalon appear as two mob bosses, Hechy and Angie, who bring Tony the news that "God" (Marx) wants him to carry out one last job; murder his old pal "Blue Chips" Packard (Rooney), before he can testify before the US Senate's Crime Commission. Tony refuses, but upon finding his friend Harry (Stang) shot through the head, goes along with God's wishes, and is sent to the new, high-tech island prison where Packard is being held, infiltrating as a convict.

In his absence, Flo invites Stash and his friends to stay at their house, to beat a vagrancy charge. She visits Angie (as does Darlene, looking for her in turn) to persuade him to either cancel the job, or take her to God (who's living without a country, on a yacht in international waters) so she can ask personally. Angie won't take Flo — but he will take Darlene, who nonetheless insists on bringing Stash along. God takes a liking to Darlene, as does God's mistress Elizabeth (Luna) to Stash, but both are frustrated in their pursuit.

One of Tony's cellmates turns out to be a draft dodger called Fred the Professor (Pendleton); an electronics wizard who has renounced technology, but still rigs a television set to allow Banks to communicate with Packard between cells. Banks realises he can't kill his old friend, and thus will probably never leave the prison. He writes his wife with the news, on stationery borrowed from Fred, and ignores Fred's pleas not to lick the envelope. When he does, he discovers the hard way that all the stationery is soaked with LSD... enough to send the whole prison on a hard trip. Fred guides Tony through the resulting acid experience, helping him come to terms with his worries about Darlene and his past, and plotting their escape. 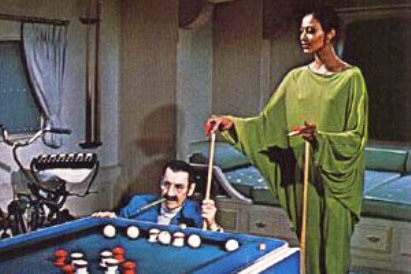 Darlene and Stash spend the night aboard God's yacht, with Stash getting word back to Flo and his friends about their location, and a coded plea for help. As the hippies mount a rescue, Tony and Fred build a makeshift balloon from discarded freezer bags and garbage cans, dump the whole supply of stationery into the prison's lunch, and fly out of the prison as everyone below begins to freak out.

As it happens, both the hippies (led by Flo, who sings the title number as they storm the yacht) and the balloon arrive at God's hideaway at the same time. As they hunt him down, God abandons ship. Tony and Flo borrow a cabin on the yacht and renew their relationship, while Angie marries Elizabeth, and Stash and Darlene take their own hippie vows. God and Fred sail off together to pursue a simpler life.

Before anyone can leave their seat, Preminger's voice calls out "Stop!" and beckons the audience to stay for the credits, sung by Nilsson with asides ("How was your popcorn?").

The movie missed the mark with both critics and audiences, and bombed at the box-office. A soundtrack album by Nilsson was issued, along with a single, "I Will Take You There," but neither became a hit. The movie received some belated attention in the 1980s when it was shown on cable television, and the soundtrack was lauded when it was reissued on CD. Nonetheless, no official home video release has ever been made, and the movie is presumed locked away in the Preminger archives, as was Bunny Lake Is Missing for several years. The Museum of Modern Art in New York City periodically exhibits a 35mm print of the movie.

Writer Paul Krassner published a story in the February 1981 issue of High Times, relating how Groucho Marx "prepared" for his role in an LSD-related movie by taking a dose of the drug in Krassner's company, and had a moving, largely pleasant experience. (In his book The Grouchofile, Marx commented that both the movie and his performance were "God-awful!") Most of the rest of the cast and crew, though, apparently had no familiarity with the drug; Nilsson (who reportedly did use LSD years later) confessed he'd simply pretended to be drunk for his role.