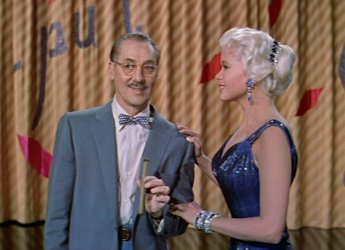 Another movie with only a very short appearance of Groucho, this American romantic comedy film stars Jayne Mansfield and Tony Randall.
It was produced and directed by Frank Tashlin, who also wrote the largely original screenplay, utilizing little more than the title and the character of Rita Marlowe from the successful Broadway play "Will Success Spoil Rock Hunter?" by George Axelrod. The Broadway play ran from 1955-1956 and also starred Jayne Mansfield as Rita.
Will Success Spoil Rock Hunter? received a nomination for a Golden Globe for Best Motion Picture Actor - Musical/Comedy (Tony Randall) and a nomination for the Writers Guild of America, East WGA Award (Screen) for Best Written American Comedy (Frank Tashlin). The character, Rita Marlowe, is loosely based on Marilyn Monroe.

A writer for television advertising, Rockwell P. Hunter (Randall), is low on the ladder at the company he works for. He then finds the perfect model and spokesperson for his new line of lipstick, the famous actress with the "oh-so-kissable lips", Rita Marlowe (Mansfield).
In order for Rita to endorse the lipstick, however, Rock has to pretend to be her boyfriend to make her real boyfriend, Bobo Branigansky (Hargitay), the star of a TV Tarzan show, jealous. Bobo leaks the news of Rita's new romance to the tabloids and Rock Hunter is suddenly famous. Women are crazy about him and he moves steadily up the ladder at work, becoming company president, only to find it is not what he really wanted.
At the behest of his agency, Rock is forced to propose to Rita on a coast-to-coast TV show, which breaks the heart of his fiancée, Jenny Wells (Drake), who is not too pleased, but she takes him back in the end. Both Rock and Rita are saved from a marriage neither one wants by the last-minute arrival of Rita's hometown boyfriend, George Schmidlap (Marx).